I hope everyone is finding some relaxation, recovery, and reflection in the final days of 2013. Currently, my newest book Mavericks: Conversations with Indie and Root Rock Icons is under review at a major press, so I am awaiting their response and gathering the visual elements of the book, including flyers, fanzine clippings, and photography. The text is large, several hundred pages, and will encompass artists from the Clean and Radio Birdman to the Violent Femmes and Ralph Stanley. I should know more very soon.

I also continue to edit a book of poetry with Peter Case of the Nerves and Plimsouls, which should be completed within the next month as well as we make the final content decisions and craft the front cover.

In addition, Visual Vitriol continues to make a deep impact on academic studies. I just received notice that my focus on street posters as the “second skin of cities” and other related concepts has been cited several times in “You and I aren’t so equal; the visual representation of gender inequality in the contemporary  New Zealand workforce and the visual manifestation of inequality in Wellington’s southern suburbs,” by Natalie Ellen-Eliza for a thesis presented in fulfillment of the requirements for the degree of Master of Philosophy in Visual and Material Culture at Massey University, Wellington, New Zealand. You can actually read her entire work here.

In the meantime, I was able to spend last night with my former student turned graphic designer Beau Eaton at a local bar that has been open since the 1940s. He made an incredible Visual Vitriol poster using old-fashioned hand-set type for a show at Umpqua Community College in Oregon, so I present it to you again, along with my own Bowie-centric one as well. Enjoy your winter… 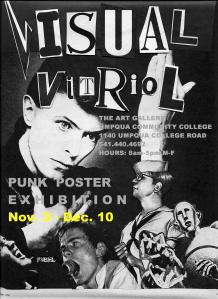 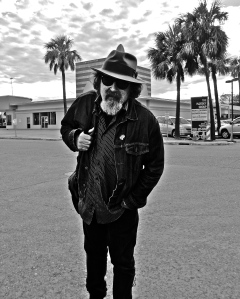 First, I hope the upcoming winter season finds everyone in good spirit and productivity! I was able to spend much time with Peter Case of the Plimsouls and Nerves these last two weeks. We appeared together at Cactus Records in Houston, and he also gigged at Mucky Duck a few weeks later as well. I snapped this pic of him not far from the record store after looking at the palm trees and thinking, ‘This could be the front cover for Miami by the Gun Club,” a band we both admire.  So, this pic is an homage of sorts. We are gathering work for our follow-up to Epistolary Rex, our book of letters and correspondence. This one will likely include poems, prose, and tour diaries. The text editing and selection is underway as I pen this update, so look for it to be published this next year, either DIY or by a small indie press.

Next, Left of the Dial just received a very positive and compelling review in the long-time iconic German fanzine Trust. I thank writer Jan for his input and support. In fact, the Vic Bondi interview in LOTD was previously published by Trust, plus they published the skate punk theory section of Visual Vitriol as well, so I am indebted to their commitment: they continue to find my work an European audience.

Lastly, I am preparing an academic article relating to the politics of punk, which should be completed at the end of the month. Please read the abstract below, and if you have any documents, fanzine articles, reviews, or insight and experience that may help with the effort, please feel free to contact me at: leftofthedialmag@hotmail.com.

Also, visit the archive I have established to highlight the punk-meets-politics material here.

Practicing What they Preach? Using the Visual Culture of Punk Flyers to Index Counter-Cultural Conscience

Abstract: For decades, punk rock has been equated with ever-shifting and fluid concepts of dissent, disruption, and antithetical activities. As such, punk has been deemed a threat to social-cultural mores since its first and second wave incarnations during the 1970s and 1980s, when bands in Britain from The Clash and Crass to Newtown Neurotics and the Membranes offered pithy political invectives and counter-culture visions. In the United States, bands like The Dicks, Dead Kennedys, and Millions of Dead Cops followed suit in America, pushing similar boundaries as the music mutated into “hardcore” —  a harsher, stripped down, and more choleric variant of punk — that branched deep into suburban enclaves.  My book Visual Vitriol (University Press of Mississippi, 2011) explored both the street art and social discourse of this generation, while my new on-line digital archives, including over 300 politically related gig flyers, and curatorial activities, such as co-organizing the exhibit Punk and Politics in Portland at the vegan, worker-managed collective Red and Black Café during July 2012, focus on mapping, quantifying, and understanding the various activism inherent in punk. My text will provide an overview of those projects, highlight where punk money was gathered and spent (while probing whether it promoted volunteerism, philanthropy, and community involvement), and try to paint an accurate picture of how punk critiqued dominant culture not simply by offering rhetorical stances, symbolic strategies, and clever conceits but by channeling support and media to a wide array of social, cultural, labor, political, gay and lesbian, and environmental efforts.